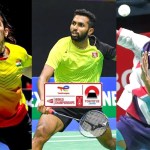 Lakshya vs Prannoy LIVE for place in QUARTERFINALS: Prannoy stunned second seed Kento Momota in straight games on Wednesday to record a sensational win over former World No. 1 Japanese shuttler. Unseeded Prannoy rose above expectations to shut the door on crowd favourite and two-time former world champion Momota 21-17, 21-16 in a second round tie.

Prannoy’s opponent in the LAST 16 will be the reigning Commonwealth Games champion Lakshya Sen. 9TH seed Lakshya sailed into the pre-quarterfinals with a straight game win over Spain’s Luis Penalver. The young Indian badminton ace Sen won his second round contest 21-17, 21-10.

Prannoy and Sen will face each other in an all-Indian last 16 clash on Thursday.

Kidambi Srikanth EXITS: However, last edition’s runner-up Kidambi Srikanth crashed out after a straight game defeat to world number 32 Zhao Jun Peng. Srikanth went down against his Chinese counterpart 18-21, 17-21 in a match lasting only 34 minutes.

Earlier, the Indian men’s doubles pair of MR Arjun and Dhruv Kapila moved to the pre-quarterfinals but Ashwini Ponnappa and N Sikki Reddy made a second round exit from the prestigious tournament.

They will face Hee Yong Kai Terry and Loh Kean Hean of Singapore next.

The 7TH seeded men’s doubles pair of Chirag Shetty and Satwiksairaj Rankireddy thrashed Guatemala’s Solis Jonathan and Anibal Marroquin 21-8, 21-10 to storm into Round of 16. They will be up against Denmark’s Jeppe Bay and Lasse Molhede on Thursday.

What time will the BWF World Championships 2022 begin?

Which TV channels will broadcast the BWF World Championships 2022?

The BWF World Championships 2022 will be telecast on DD Sports & Sports18 channel in India.

How do I watch the live streaming of BWF World Championships 2022?