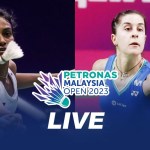 Sindhu vs Marin LIVE – Malaysia Open Badminton LIVE: PV Sindhu is all set to make a comeback after a five-month injury lay-off. The World No.7 will begin her Malaysia Open campaign on Wednesday, 11th January 2023. Sindhu will however not have have it easy as she will straightaway be up against her old foe Carolina Marin. Marin, the former World Champion is currently ranked World No.9. Both the players are expected to begin action soon. The match can be watched LIVE on Voot Select Follow Malaysia Open 2023 LIVE updates on InsideSport.IN

Sindhu was last seen in action at the Commonwealth Games in August. The 27-year old won the gold medal in the multi-nation event. However it came at a cost. She suffered hamstring injury and subsequently had to withdraw from all the other remaining tournaments in 2022.

Sindhu is now fully fit. After five months she is raring to make her return to the circuit at the Malaysia Open. She has maintained her ranking as the seventh-ranked player in the Women’s Singles. The Indian aims to go up in the upcoming season. She will however have to surpass the challenge from Carolina Marin, who poses a big threat in the first round.

Like Sindhu, Marin too has faced injury struggles over the last year.  She has been out of action for nearly a year after suffering knee injuries. The Spaniard had to undergo surgery and made her miss the Tokyo Olympics. She finally made her return during April last year and won the European Championships straightaway. It was her only title and her next best performance was a runner-up finish at French Open. She is currently ranked World No.9.

Sindhu & Marin’s rivalry over the years

At the Rio Olympic in 2016, Carolina Marin and PV Sindhu advanced to the final. Both the players were aiming to win their first Olympic gold medal. Sindhu, who was World No.10 back then started off well challenging the Spaniard. Both the players fought hard but it was Sindhu who took the first set 21-19. However, in the high-pressure clash, Marin came back strong and displayed nerves of steel as she went on to win the next two sets 21-12, 21-15 to get her hands on her first-ever Olympic Gold medal.

Sindhu finally managed to take the revenge against Carolina Marin at the India Open in 2017. Both the players made their way into the summit clash of the tournament. Playing in front of the home crowd, Sindhu started off well against the Spaniard, who was the top seed. She waived off yet another challenge and grabbed the first game 21-19. This time, Sindhu ensured there were no hiccups as she dominated in the second game as well and won the contest in straight sets. This was Sindhu’s maiden title at the Indian Open.

Both the players met yet again in a final at the 2018 World Championships. Sindhu was the third seed in the tournament, while Marin was seeded seventh. Both the players made their way into the finals. This time it was Marin who was on top. Avenging her defeat a year ago in the Indian Open final, Marin raced to a 21-19, 21-10 victory against the Indian. With this the Spaniard was crowned as the World Champion.

Sindhu vs Marin Head-to-Head record: Both the players have so far faced each other 14 times on the BWF Tour. Marin leads the head-to-head record 9-5. The Spaniard has won their last three encounters. The most recent meeting was at the Swiss Open in 2021. The Spaniard won the contest 12-21, 5-21.

Where to watch Sindhu vs Marin LIVE streaming?

The match between PV Sindhu and Carolina Marin at the Malaysian Open can be watched LIVE on Voot Select App.