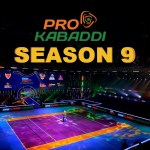 Pro Kabaddi League LIVE: The ninth edition of the Pro Kabaddi League will begin on October 7 at the Sree Kanteerava Stadium in Bengaluru. On a ‘Triple Panga’ night, defending champions Dabang Delhi will kickstart the campaign by facing U Mumba in the first match of the league. Then home team Bengaluru Bulls will take on Telugu Titans in front of their home crowd, while UP Yoddha and Jaipur Pink Panthers will face each other in the final contest of the night. The first match is scheduled to begin from 7.30 pm onwards.

All aboard for a spectacular journey with the Naveen Express

Dabang Delhi vs U Mumba

After winning their maiden Pro Kabaddi League title last year by defeating Patna Pirates in the final, Dabang Delhi are eyeing their second successive title this year. The team will be led by their top player Naveen Kumar, who was retained ahead of the auction this year. The youngster was the most valuable player for the last two successive seasons and this time has been given the responsibility of leading the side. They also have Vijay Malik, who was instrumental in helping the team win the title with his all-round display. Both the players will once again has to deliver for the team as Coach Krishan Kumar Hooda has opted for a young team this season that lacks experience.

One area that Delhi is said to be on the weaker side is its defence as they don’t have the experienced names like Joginder Narawal, Manjeet Chhilar and Jeeva Kumar this year. Instead they bought players like Amit Hooda and Sandeep Dhull who will have to take care of the team’s defence this.

U Mumba finished in the 10th spot on the points table last season and are looking for a revival under new coach Anil Chaprana. Defender Surinder Singh has been named as the captain and he will lead the defence. They have also retainded defender Rinku, who was impressive last season. However the team failed to retain Ajith Kumar and Abhishek, who were the team’s star performers in the raiding department last season. Guman Singh, who had a fruitful season last year for Patna Pirates will lead the raiding department this year for U Mumba.

All set for the action to begin, #BullsSene?

Without Pawan Sehrawat, Bengaluru Bulls will be led by the experienced Vikas Kandola this year. Vikas has consistently scored over 170 raid points over the past 3 seasons and a lot will be expected of him this year to fill in the shoes of Sehrawat. Apart from Kandola, the team retained the services of GB More and Bharat, who played a vital role for the team last year as the secondary raiders. In the defence they have retained their core from the last season with Mahender Singh appointed as a skipper. Saurabh Nandal, who was the third highest-scoring defender in the last season will continue to lead the defence of the Bulls. Aman Antil  too has been retained and he will support Nandal in the other corner of the defence.

Meanwhile, having finished on the bottom of the table last year, Telugu Titans are eyeing a resurgence this season. This year Siddharth Desai is expected to be fully fit and leads the team’s raiding department. They also have a good secondary raiders in Monu Goyat, who was part of Patna Pirates last year and Abhishek, who was the top raider for U Mumba in the previous edition. In the defence, they have three big names with Ravinder Pahal being named as the skipper. Apart from him, they have acquired the services of Vishal Bharadwaj, who will be in the right corner and Surjeet Singh, who led Tamil Thalaivas last season and is one among the Top 5 all-time highest tackle-points scorers in the league. With such a strong team on paper, they are looking to start the season on a positive note.

Jaipur Pink Panthers vs UP Yoddha

The inaugural champions Jaipur Pink Panthers are eager to put on a good show in tis year’s PKL season. The franchise has retained their star raider Arjun Deshwal, who finished as the league’s second-best raider last season. He will continue to lead the raiding department and this time will have an ample support in Ajith Kumar, who was bought by the Panthers this year at the auction. Apart from the pair, they also have veteran Rahul Chaudhari in their ranks.

In the defence, they have acquired the services of Sunil Kumar at the auction this year and he has been handed over the captaincy as well. He will take care of the right corner, while they have retained the experienced Sahul Kumar for the left corner. But apart from these two players the defence lacks experience.

Meanwhile, UP Yoddha have retained their core with Nitesh Kumar leading the franchise. He will play a crucial role in defence alongside  HAshu Singh who will be in the right corner and Shubham Kumar. Meanwhile Pardeep Narwal will lead the raiding department of the team. The star raider had a disappointing season in the previous edition as he struggled for form. He will look to get back to his best. They also have  Surender Gill who impressed everyone as he emerged as the top raider for the team last year. This year at the auction, they also bought Nitin Tomar who would serve as a perfect back-up in the raiding department.