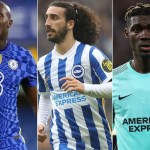 Romelu Lukaku – The Belgian striker is reportedly prepared to leave the London Blues and move back to his former club Inter Milan. The Serie A side reportedly made a 5 million loan bid for the striker which was then rejected by Chelsea.

Inter Milan which is currently burdened by financial constraints cannot sign Lukaku on a permanent transfer and has thus opted for a loan deal, where they will pay a major portion of the salary. Lukaku joined Chelsea for a club-record deal of £97.5m. Chelsea apparently wants £20m for the loan deal but Inter Milan has offered quite less and thus the first bid has been rejected.

Inter have made an opening bid today for Romelu Lukaku: €5m loan fee. Chelsea have rejected this proposal and Inter are waiting for a price tag – talks will continue this week.

Lukaku has told Boehly and Tuchel he only wants Inter move, so he’s pushing. pic.twitter.com/eYFl6FA8nT

It has been understood that the deal will go through in the coming days, with both the clubs negotiating and coming to a final deal. Lukaku has spoken with Chelsea manager Thomas Tuche, making it clear that he wants to play at Inter Milan.

Excl: Manchester City are now set to submit opening proposal to Brighton for Marc Cucurella. First bid ready to proceed in advanced talks in the next days.

As per reports from Fabrizio Romano, Manchester City are ready to submit their first bid for the player in the upcoming days. The champions are desperate to increase their squad depth. Joao Cancelo is the chief left-back for Manchester City while Zinchenko is the reserve player. Adding the likes of Cucurella will strengthen the City squad depth.

Yves Bissouma – The Brighton and Hove Albion defensive midfielder has reportedly signed for Tottenham Hotspur for a price of €29m. Top journalist Fabrizio Romano has reported that the deal has been finalized and medicals for the player have also been scheduled. The official confirmation about the transfer of the player will be confirmed by both the clubs in the coming days.

Tottenham are set to complete Yves Bissouma deal, here we go! There will be final contacts with Brighton today on payment terms, then paperworks time. Medical already scheduled as expected.

Agreement on €29m fee plus add-ons. Final details, then it will be signed. pic.twitter.com/qbgAU8ZGbv

The 25-yea-old midfielder from Ivory Coast joined Brighton in 2018 and has played a total of 112 games for the club. Known to be one of the most promising players in his position, the young player will be a good fit in Antonio Conte’s style of play.