NewZealand Squad vs India: Kane Williasmon to lead the KIWIS both in ODI’s & T20’s, no place for Boult & Guptill in squad: Follow LIVE UPDATES 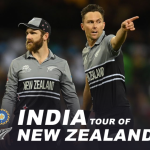 NewZealand Squad vs India – Kane Williamson to lead: The host NewZealand Cricket have announced their squad & Kane Williamson will lead the Kiwis in both T20 & ODI Series vs India. Meanwhile, Trent Boult & opening batter Martin Guptill have been dropped from the squad. Instead NZ selectors have included rising star Finn Allen in both the squads. The series between India vs NewZealand is starting in Wellington on Friday: Follow IND vs NZ LIVE Updates with InsideSport.IN

*Jimmy Neesham has been excused from the squad for the third ODI as he prepares for his wedding, with Henry Nicholls the replacement for the final match in Christchurch.

NewZealand Squad vs India: Kane Williasmon to lead the KIWIS both in ODI’s & T20’s, no place for Boult & Guptill in squad: Follow LIVE UPDATES

Kane Williamson to lead: The 23-year-old Allen has already played 23 T20Is and eight ODIs for the BLACKCAPS, amassing five half-centuries and a hundred.

Allen’s retention at the top of the order for both squads means there’s no room for Martin Guptill.

Trent Boult is the other notable omission from the squads. Tim Southee, Matt Henry (ODIs only), Lockie Ferguson, Blair Tickner and Adam Milne will fill the pace bowling ranks.

Milne is in line to play his first ODI since 2017, building on his return to the T20 International arena during the recent Tri Series and last year’s ICC T20 World Cup in the UAE.

BLACKCAPS coach Gary Stead said it was never easy leaving out the experience of Boult and Guptill but the team had to keep looking ahead.

“When Trent opted out of his NZC contract in August, we indicated that priority would be given to those players with either central or domestic contracts. And that’s been the case here,” he said.

“We’re all aware of Trent’s world class ability, but at this time – as we build towards more global events, we want to give opportunities and experiences to others.

“The emergence and success of Finn at the top of the order in white-ball cricket means a guy of the class of Martin Guptill misses out. That’s just the nature of high performance sport.

“With the 50-over World Cup less than a year away we’re keen to give Finn every opportunity. He should keep gaining ODI experience. Especially against quality opposition such as India.

“The message to both those players is that there’s a lot of international cricket ahead. The door is certainly not closed to them.”

NewZealand Squad vs India: The tour begins with a three-game T20 International series across Wellington (Nov 18), Tauranga (Nov 20) and Napier (Nov 22). The ODI Series will start n Auckland (Nov 25) and will move to Hamilton (Nov 27) and Christchurch (Nov 30).

The one-day series could see Tim Southee become the fifth New Zealander to claim 200 ODI wickets. The 33-year-old’s tally is poised on 199.

Tom Latham returns as the ODI wicket-keeper with Devon Conway continuing behind the stumps for the T20 side.

Kane Williamson will captain both sides with the T20 squad assembling in Wellington on Wednesday.

Ben Sears (back) and Kyle Jamieson (back) were not considered for selection due to injuries.

Stead said it was always a special time having India in the country and was sure the tour would be an exciting one for players and fans alike.

“There’s always an incredible buzz when India come to town,” he said.

“The energy and noise is incredible. I know the team are really looking forward to getting back and playing in front of some big home crowds.

“India are a world-class side stacked with stars and we know we’ll have to be right at the top of our game.”

India announced two formidable squads last week which were stacked with household names, despite the resting of some senior players.

The post NewZealand Squad vs India: Kane Williasmon to lead the KIWIS both in ODI’s & T20’s, no place for Boult & Guptill in squad: Follow LIVE UPDATES first appeared on Inside Sport India.