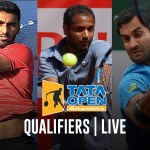 Prajnesh Gunneswaran vs Maximilian Marterer – 11.00 AM

Prajnesh Gunneswaran aims for a spot in the main draw of the Maharashtra Open. The 348th ranked Indian faces Germany’s Maximilian Marterer in the first round of the qualifiers.

Prajnesh featured in the main draw of the Maharashtra Open last season. However he didn’t had a great 2022 and due to the slip in rankings, he could only feature in the qualifiers of this year’s edition. His best performance in 2022 is a runner-up finish at Monterrey Challenger. The Chennai lad is looking to start the season afresh as he aims for a spot in the main draw.

Meanwhile, Maximilian Marterer i s the fourth seed in the qualifiers. The 27-year old made it to the main draw at the Australian Open and US Open in 2022. His best performance is a runner-up finish at Braunschweig Challenger.

Ramkumar Ramanathan will be gunning to make it to the main draw. The 435th ranked Indian won the doubles title in last year’s Maharashtra Open alongside partner Rohan Bopanna. His singles performance have been underwhelming in 2022. He looks for a turnaround of fortunes.

The Chennai lad will be facing sixth seeded Otto Virtanen from Finland. The 21-year old’s best performance in 2022 was a runner-up finish at the Bergamo Challenger. Being the sixth seed he enters the first round of the qualifiers at the Maharashtra Open as the favourite.

He will face Germany’s seventh seeded Cedrik-Marcel Stebe in the first round of the qualifiers. Stebe is ranked 203rd in the world. He won the Como Challenger title in 2022, which was his only title in the year.