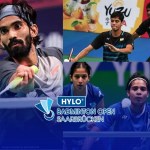 Meanwhile, in the Women’s Singles Aakarshi Kashyap has bowed out of the tournament after suffering straight set defeat against Denmark’s Line Kjaersfeldt.

Kidambi Srikanth started the first game on a positive note as he led 6-1 at the start of the match. However he let his opposition make a terrific comeback in the contest as from 1-6, Merkle clinched the next six points to reduce the deficit to 6-7. The Frenchman soon levelled the scores 8-8 and entered the interval with a 11-9 lead. After the break, Merkle took hold of the game as from 15-11, he won the net six points on the trot to clinch the first game 21-11.

In the second game, Srikanth showcaed his class as he dominated right from the start. He entered the interval comfortably with a 11-4 lead. After the interval too Srikanth didn’t face much challenge from Merkle as he comfortably won the first game 21-13. In the third game too Srikanth played with the same intensity dominating the game. At half-time he was leading 11-6 and allowed his opponent to get only four more points as he closed out the cgame 21-10 to advance to the quarterfinal.

Top Indian men’s doubles pair of Satwiksairaj Rankireddy and Chirag Shetty advanced to the quarterfinals after a hard-fought win here on
Thursday. Satwiksairaj and Chirag, seeded third in the tournament, beat the English pair of Rory Easton and Zach Russ 22-24 21-15 21-11 in a pre-quarterfinal match that lasted one hour and two minutes.

Like their previous game against Chinese Taipei’s Yang Lee and Chen Lu, the Indian pair appeared rusty in their first game as they committed way too many errors that hekped the English pair enter the interval in the first game with a 11-7 lead. The India  duo came back with confidence after the interval and challenged the English pair as they managed to level the scores 19-19. However the English duo held their nerves to take the first set 24-22, stunning the third seed.

The Indians found it hard at the start of the second game too but after a neck-to-neck battle they finally managed to take the lead and entered the break with a four-point lead with the score at 11-7. From then on, it was dominance from the Indian side as they won the game 21-15 and took the contest into the decider.

In the third game, the English pair lost their intensity completely as the Satwik and Chirag raced to a 9-1 lead soon and entered the break with 11-5 lead enjoying a six-point cushion. It was then all smooth sailing for the third seeded pair as they grabbed the game 21-11 and qualified for the quarterfinal.

The Indian duo, who recently won the French Open Super 750 title, will be up against the seventh-seeded English duo of Ben Lane and Sean Vendy in the quarterfinals.

Aakarshi Kashyap couldn’t go past Denmark’s Line Kjaersfeldt in the second round of the tournament as she suffered a 21-13, 21-14 defeat in straight games. Kashyap started the first game with a 0-2 trail but fought back to clinch four successive points on the trot to lead 4-2. The Danish however managed to get the next three points to take back the lead. She entered the break with a four-point lead. Kashyap couldn’t make a comeback in the game as the Dane went on to win the game 21-13.

In the second game, Kashyap yet again started off with a 3-1 lead but like the first game, Kjaersfeldt managed to take 4-3 lead. This time, Kashyap gave a good fight as she managed to level the scores 6-6. From then on a neck-to-neck battle followed and the Indian managed to enter the interval with a slender 11-10 lead. However after the break, Kjaersfekldt came back strongly as she took back the lead and from 12-11, she took the next six points on the trot and took the lead to 18-11. She closed out the game 21-14 to defeat the Indian and advanced to the quarterfinals.

Treesa Jolly and Gayatri Gopichand didn’t have a good start in the contest as they trailed 5-1 against the Thailand pair immediately after the start of the contest. However after taking sometime to settle, the Indian duo managed to reduce the deficit to 7-8. However Jillie and Seinen didn’t let the Indians to take the lead as they entered the interval with a 11-8 lead. In the second half of the first game, the Indians managed to make a comeback as they fought well and took the lead  18-17. They soon showcased their class and closed out the game 21-18.

Intense action continued in the second game too as right from the start, the second game was neck-to-neck as both the pairs picked up seven points each. The Thai pair fought well to win the next four points on the trot and entered the interval with a 11-7 lead. After the interval, the Thai pair continued their good run and threatened to run away with the game as they led 12-17. But the Indians showcased their never-say-die attitude as they made a spirited comeback to level the scores 17-17 by notching up five successive points.

It became a nail-biting contest soon in the dying moments of the game the Indians however prevailed in the end as they clinched a 21-19 victory to advance to the quarterfinals.

Rutuparna Panda and Swetaparna Panda bowed out of the tournament after a 16-21, 7-21 defeat against Chinese Taipei’s Hu Ling Fang and Lin Xiao Min. The Indian pair couldn’t even come close to challenging the Taiwanese pair as they succumbed to straight game defeat.

The Panda sisters started the contest by winning the first point of the first game. However Hu-Lin duo took the lead and was able to enter the break with a six-point lead as the scores read 11-5. The Panda Sisters tried hard to fight back but couldn’t close out the lead as they lost the first game 16-21.

In the second game, The Taipei duo started off with a 5-0 lead and completely dominated the remainder of the game. They entered the break with a 11-5 lead and in the second half of the game, allowed the Indians to take only two points as they knocked them out of the tournament.

Malvika Bansod was at her best as she completely dominated a higher ranked opponent in 18th ranked Kirsty Gilmour before the Scottish player withdrew from the contest as the scores read 24-22, 19-7 in favour of the Indian.

Right from the start neck-to-neck battle began between both the players. However it was Gilmour who broke the deadlock as she took the first lead in the contest as the scores were 7-5 in her favour. The Scottish then entered the interval with a 11-7 lead. After the interval, Bansod gave a good response as she managed to resude the deficit 12-14. The Indian gave a good fight and in the end finally managed to level the scores 20-20. The spirited Indian took a 22-21 lead and went on to win the first game 24-22.

In the second game, Bansod began with a big lead as she took the score to 7-2 and entered the interval with a 11-6 lead. She continued her dominance and was close to closing out the game in straight games before Gilmour pulled out with an injury when the scores were 19-7.