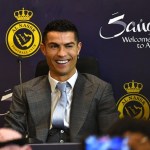 Cristiano Ronaldo: South Africa: Cristiano Ronaldo and mistakes – no chance. That’s what one thinks about Ronaldo, when is in on the football pitch. However, Ronaldo’s latest slip-up in a press conference has made him the Butt of all jokes. CR7 made an embarrassing goof-up as he referred Saudi Arabia as South Africa. After a bitter tiff with Manchester United, Ronaldo decided he wanted to venture out of Old Trafford. Cristiano decided to move out of Europe as he signed a deal with Al-Nassr in Saudi Arabia. Follow all Football LIVE Updates on InsideSport.IN

In the press conference before his unveiling, Ronaldo confused the countries he was playing in and made a fool out of himself. The press conference was quite bizarre with people asking for selfies and applauding the new #7 of Al Nassr. When Ronaldo spoke, he dropped a clanger.

Cristiano said, ‘For me it is not the end of my career coming to South Africa. This is why I want to change and to be honest I really don’t worry about what people say. I took my decision and I have a responsibility to change that.’

It seemed as though the press conference was filled with fans as they kept shouting ‘Suiiii’, which is his trademark celebration. No journalist was also allowed to ask questions as only a club official kept asking soft ball questions at Ronaldo.

The Portuguese forward insisted that his journey in Europe is complete. He also stated that a lot of clubs in Europe, Australia, Portugal, Brazil, and the USA contacted him but he decided to take the leap with Al-Nassr.

Ronaldo has signed a 2-year contract worth £173 million-a-year deal with Al-Nassr. This also includes him being a brand ambassador for Saudi Arabia. But, it is safe to say that the start of this relationship between the two has not been the best, with this slip-up.