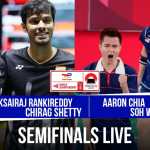 All the best @satwiksairaj & @Shettychirag04

Rankireddy/Shetty vs Chia /Yik Head-to-Head: This will be the sixth meeting between both the pairs. All the five previous matches were won by the Malaysian duo. They met twice this year with the most recent one during the Commonwealth Games 2022. Rankireddy-Shetty duo lost the contest in straight games. The Malaysian pair once again enter the upcoming match as the favourite.

Where to watch the live streaming of BWF World Championships 2022?